My father lived to be a hundred. At age ninety-nine, he broke his hip playing kickball with a group of five-year-olds.

Until his late seventies, my Dad received a flu shot every year, following the instructions of his primary care physician. And every year he was sick with the flu!

Finally, he decided to adopt a new strategy. With our advice, he began to strengthen his immune system, primarily by eating more immune-supporting foods.

He was never sick again!

What happened? Could the flu shot actually be BAD medicine?

When Dr. Connie and I had a clinic in Vermont, there was an epidemic of pertussis (whooping cough) in the town where we practiced.

Our unvaccinated four-year-old son contracted the disease. But so did fifty percent of the children in the town – including those who HAD been vaccinated for pertussis!

Our son was not sick in bed for one minute! He had his normal energy, running around and playing, even though it broke our hearts every time he “whooped.”

The rest of the children were very ill, bedridden, and many parents asked for our help.

Okay, that was downright strange! Why did the children who WERE vaccinated become sicker with the illness they were vaccinated against?

Here’s a bit of immunology 101: The heart of the immune system is the white blood cells (WBCs). There are several kinds of WBCs, each of which plays a different role in immune function.

Like an army, the WBCs are the body’s first line of defense. If an invader (bacteria, virus, fungus) makes it past the WBCs, the body calls up its reserve army – the antibodies (ABs).

The problem with vaccines is that they don’t strengthen the body’s white blood cell response – they only stimulate production of antibodies (ABs).

That doesn’t sound like such a bad thing – after all, the ABs neutralize pathogens in the body.

However, the ABs are created in response to a specific pathogen, and they remember those specific past pathogen insults to the body. But this “memory pool” of ABs is not infinite. In fact, the antibody pool can become exhausted. And when that happens, the body’s defenses against new forms of invaders is greatly weakened or incapacitated. We just don’t know how often the pool can be accessed before depletion starts. 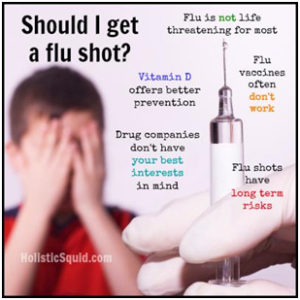 Now, here are two important questions to ask yourself: (1) When you were a child or young adult, how many people did you know who had cancer? (2) At this present moment in your life, has that number of people increased?

I don’t think it’s a coincidence that the current cancer epidemic is so huge. One in three people in this country will contract cancer by age 65!

Also, there’s a stunning, undeniable synchronicity between the rise of the three-letter viruses (e.g., HIV, CMV, EBV) and the beginning of mass vaccinations.

Could vaccinations deplete the immune system to a point where the body becomes more susceptible to opportunistic infections and cancer?

I’ve long thought that in about a hundred years, the practice of mass vaccination will be relegated to the waste bin of medical mistakes, along with other thoroughly discredited treatments like bleeding with leeches.